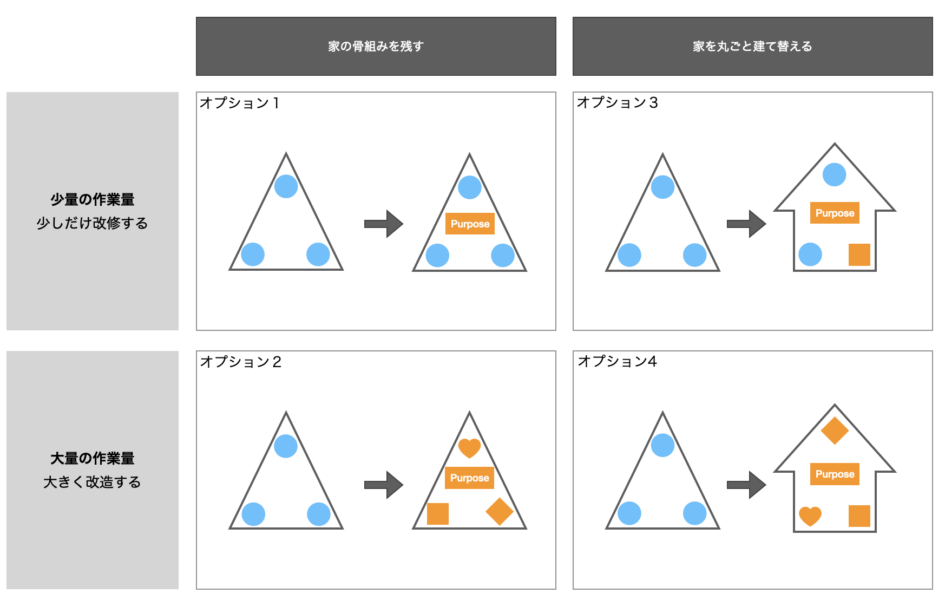 If your organization isn’t in the startup phase, it is likely that you have an existing philosophy system. In this post, let’s focus on this situation:

The House of Philosophy

Think of a philosophy system as a house. The house contains the elements of your philosophy such as mission, vision, and values.

Like renovating a house, there are several approaches to updating the philosophy system.

Do we modify the existing philosophy system?

The first decision we have to make is if we should modify the existing philosophy system.

Let’s look at two cases where you might want to refrain from changing the existing philosophy system.

If your organization fits one of these cases, you might be wondering, if we can’t touch the existing philosophy system, how do we instate a purpose?

The idea here is to instate a purpose that is separate from the existing house. Under the house metaphor, it would be like building a new structure in the garden. The purpose would be an addition to the house; both the house and purpose coexist on one piece of land.

In practice, one of the common approach is to position purpose as a slogan, which serves as an addition to the existing system. With this approach, you’re able to preserve the existing system while adding purpose for your company.

When positioning purpose as a slogan, be aware of a slippery slope: being carried away of just creating a nice-sounding phrase. As a slogan, it should have a good ring and be catchy, but we must remember the job of the purpose. The statement has to answer the essential question: why does the company exist?

Options for modifying an existing house

Next let’s move on to the next scenario where we choose to modify the existing philosophy system.

In this scenario, there are two key dimensions:

Taking these two key dimensions, we can create a 2×2 matrix, which represents 4 options for updating an existing philosophy system.

In this case, we keep the frame of the house and integrate purpose with minimal construction.

For example, a client’s brand platform was a triangle made of vision, mission, and values. The defined a purpose and placed it in the center of the triangle.

In this case, we attempt to preserve the structure and frame, but we also do major edits to the elements. Back to the house metaphor, this would be like merging rooms and remodeling the inside of the rooms.

As an example, your organization might have a pyramid with the following layers:

You survey each layer and you find the following:

In addition to adding purpose, you decide to update the vision and simplify Values and Code of Conduct to five things. You might update the pyramid as follows:

In this case, we start from zero, but we find that there are many parts from the existing system that we can also use again.

For example, we might retain fundamental parts like the Founding Spirit (創業の精神). We then find important elements in the mission and transform that to the purpose. Finally we add a set of values to the mix. The house looks different, but the foundation retained the essential parts of its previous version.

This is the most extreme case. Basically, we scrap everything we have and build an entirely new system. This option is chosen when urgency in the air.

It is suitable when a company needs a drastic turnaround or its needs a powerful jolt to change its current trajectory. As the most extreme case, this option requires extra care in terms of change management.

We see this happen when Uber’s founder was removed as CEO due to its toxic corporate culture in 2018. To start reshaping its culture, the new CEO, Dara Khosrowshahi, created a new mission statement along with a new set of values.

Can the philosophy be smoothly embedded? （浸透）

We have covered the options for updating an existing philosophy system. In all cases, one thing to always keep in mind is that the philosophy needs to be embedded in the organization. As such, if the system is complicated and convoluted, people will have a hard time learning and remembering it.

The business environment is noisier than ever. As such, when modernizing a philosophy system, in most cases, the simpler the better. Less is more.

Why does the organization exist?

Finally, echoing what I’ve mentioned earlier, the job of the purpose is to answer the question: why do we exist?

As you update the philosophy system and consider the structure and contents, a key intent is not whether to add a purpose or not. Instead, it is making sure you have an element that clearly and succinctly represents the WHY of your company. Its very existence helps communicate the WHY to all of your stakeholders.

Reference: The case against simplification of the philosophy system

I mentioned above that in most cases, the simpler the system the better it is. As a reference, I’d like to give you two examples of when simplification shouldn’t be prioritized.

A company of engineers might find fulfillment in understanding complex and difficult schemes. They might find a complex diagram showing how the philosophical elements link to each other exciting.

A book publishing company might have a culture that loves long-form literature. The employees might resonate more with a long, beautiful, and descriptive statement of philosophy.

The takeaway: be mindful of the culture.